Following the provisions of the Ministry of Health, due to the Coronavirus Epidemic (CODVID-19), the total prohibition of parcel delivery activities in the following Italian locations was ordered by the Public Authorities: Codogno, Castiglione D'Adda, Casalpusterlengo, Fombio , Maleo, Somaglia, Bertonico, Terranova dei Passerini, Castel gerundo, San Fiorano, Vò Euganeo, Cremona, Lodi, Piacenza, Milan, Monza-Brianza, Venice.
This list may be updated following changes in the events and will last until further notice.
In the event that we receive an order with payment with destination in the aforementioned locations, the order will be canceled and the total refund of the sale will be made. Yours sincerely. KereK Customer Service 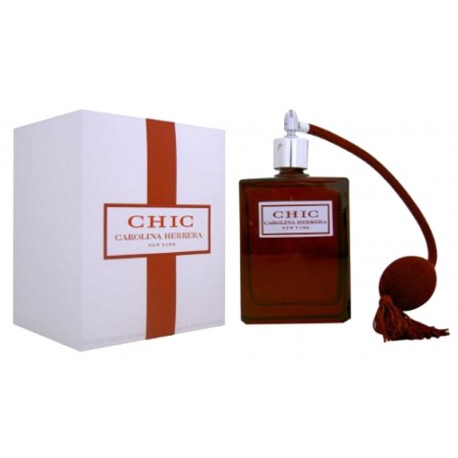 Launched in 2010 by the design house of Carolina Herrera, SO CHIC LIMITED EDITION by Carolina Herrera is classified as a rich fresh fragrance. This scent possesses notes of:. PerfumeLive recommends this feminine fragrance for everyday wear.

So Chic Limited Edition by Carolina Herrera is a fragrance from the Women's Oriental Floral Group. The nose of this fragrance is Maurice Roucel.

Launched in 2010 by the design house of Carolina Herrera, SO CHIC LIMITED EDITION by Carolina Herrera is classified as a rich fresh fragrance. This scent possesses notes of:. PerfumeLive recommends this feminine fragrance for everyday wear.

Chic by Carolina Herrera is elegant and feminine because of the seductive combination of fresh cut flowers and wood notes. This Carolina masterpiece was first developed in 2002 where the main notes include Bulgarian rose and red freesia, the heart is governed by soft and female notes of tangerine and orange; while the base includes voluptuous vanilla and white musk. After a period of time, Carolina has repeatedly reproduced the same perfume, becoming a rare and irresistible item !! So Chic Perfume by Carolina Herrera for Women !!

Designer Information:
Carolina Herrera was born in 1939 and is a native of Venezuela. After many years of being named Best-Dressed in the US she started her own ready-to-wear line in the early 80’s and her designs are heralded for their classy and subtle styles.

Most known for her elegant day and evening wear she too has her own fragrance, which bears her name. The Carolina Herrera company has also expanded into accessories and leather goods.

She injected a fresh, young attitude for the social debs; added a series of short prom dresses and elegant ball gowns, just barely bares midriffs with cropped tanks or bustiers under jackets and coats for day to evening.