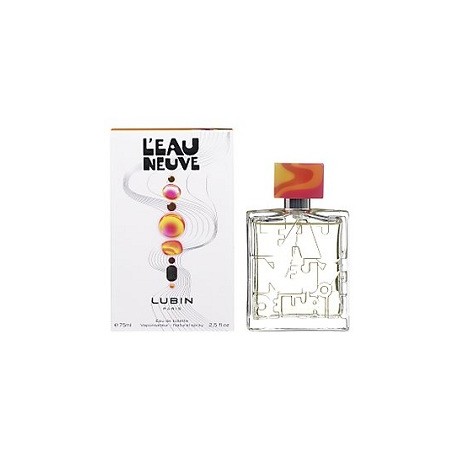 L’Eau Neuve by Lubin was created in the spring of 1968, when an entire generation was rebelling against France’s bourgeois conventions. This mass of energetic youth wanted nothing to do with “ladies’ perfumes,” fuelling a new trend for “Eaux Fraîches,” a new twist on traditional eaux de cologne. These fragrances were more concentrated than previous colognes and had a stronger essence added by discreet, crisp, and vibrant accords, giving them an elegant, lasting impact. These Eaux embodied the rediscovery of natural ingredients, particularly the Mediterranean ingredients that made up the foundation of Italian and French perfumeries in the 18th century. These new Eaux Fraîches were a part of what was referred to as the … ...

Eau Neuve by Lubin, the product of flower children, epitomizes its time. It included the traditional citrus orchard of oranges, lemons, and bergamots and aromatic notes such as thyme, chamomile, marjoram, and, of course, lavender. A harmonious, subtle accord of rose petals and jasmine could be detected in the background. The finishing touches to this well-built creation would have been incomplete without the woody notes of cedar and sandalwood, and the chypre accord of patchouli and real oak moss.

However, the free-spirited women wearing this fragrance, from Katmandu to San Francisco, had no idea that Lubin’s “Eau Neuve” was not only a nod to the new generation and its desire for liberation, but also a tribute to a much older eau de toilette called Eau de Lubin, which was created in 1798. The term “Eau de Toilette” was used exclusively for Mr. Lubin’s creation. This fragrance first became popular among the refined gentlemen and ladies of that time, and later became the favorite of Empress Josephine and Queen Marie Amélie, the last queen of France. This connotation made it only natural that “Eau Neuve” would redefine perfumery and become the signature fragrance of a new generation.

“ This subtle fragrance starts out with a cool breeze and simple keynote. soon followed by its citrus fruit notes of orange, lemon, and bergamot wafting up from an aromatic facet of thyme, coriander, and marjoram. This gives way to the woody scents of cedar, sandalwood and patchouli and ends with the undergrowth of oak moss, providing an elegant finishing note that is so contemporary you would swear that it was a brand new fragrance”. The fragrance was created in 1968 by Roger Broudoux, and reformulated very closely to the original in 2008 by Lucien Ferrero.